Forever Friends - A man and his car. 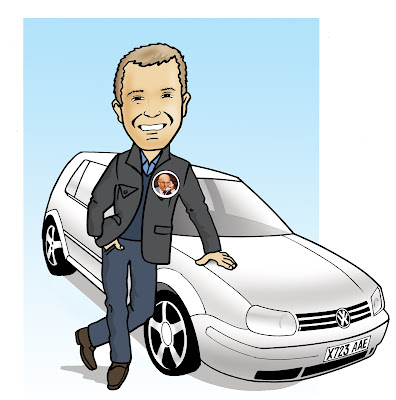 Yesterday (March 4) was our son's 34th birthday and naturally I made him a card, and presented him with a mounted print. Julian bought this car around 10 years ago and when he was starting to get successful with his company, Regency Chess Limited, about 5 years later he part exchanged it for an Audi A4.

Julian often wondered what happened to his much loved silver VW Golf. He said he wished he'd kept it and might try and track it down. If it was still on the road and well cared for he might even buy it back!

Well, the present owner of the car tracked him down and a few weeks ago and Julian paid the car a visit in Birmingham. When the guy is ready to sell it, it looks like he'll have a ready buyer. Isn't that what you call SERENDIPITY?

Who do you know who is in love with their car and would love a similar custom cartoon of themselves?
Posted by Richard Deverell Illustrator at 11:52 No comments:

This was my next cartoon strip commission for Peter Gold for his company "Hire Strategies". View on YouTube.

Posted by Richard Deverell Illustrator at 11:50 No comments: